The 17th Annual Report of the Commission for Employment Equity indicates 68.5% of top management positions at South African companies are still occupied by white South Africans.

Speaking before handing over the report to Labour Minister Mildred Oliphant on Tuesday, Commission for Employment Equity chairperson Tabea Kabinde said the statistics on transformation have remained unchanged since 2014.

“The legacy of apartheid still remains two decades into our democracy,” she said.

According to the report, Africans constitute 14.4%, Indians 8.9%, Coloureds 4.9% and foreign nationals 3.4% of top management positions.

Minister Oliphant said it was very concerning that there were just too many JSE listed companies that are completely ignoring the law.

“To date there are more than 21 companies that have been fined for non-compliance and several others that are on the verge of being fined,” the Minister said.

JSE listed companies alone account for more than 50% of the companies that have issued fines for non-compliance.

The Minister said some commentators ridicule the maximum amount that an offending employer could be fined, as too small to be a deterrent as some employers simply budget for it just in case they get caught.

“It is this state of affairs that leaves us with no option, but to consider, drafting-in harsher consequences for non-compliance. It’s time to ‘up the ante’ and this may include promulgating the ‘stick’ sections of the Employment Equity Act because quite frankly, the ‘carrot’ sections have not delivered the desired results. 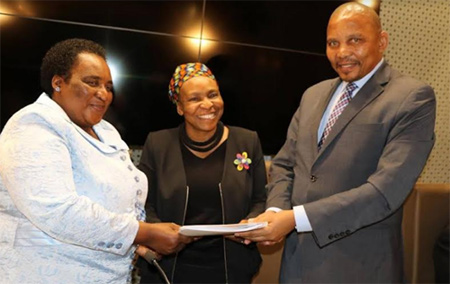 “We are seriously considering approaching the President to enact the more punitive Sections and Chapters of the EE Act, which were, initially excluded from the earlier promulgation.

“This will give the Employment Equity Act, real teeth and will bite where it hurts the most, and that is, designated employers’ revenue,” the Minister said.

Progress made, but long way to go

However, Minister Oliphant said progress has been made to redress the past even though there is still a long way to go.

She said her department has strengthened the existing labour laws and that the amendments to the Employment Equity Act were signed into law in January 2014.

“Whilst it is too early to see if at all this is giving us the desired outcomes, we take solace from the fact that already, there are signs of improvements, all-be-it small at this stage,” the Minister said.

She said the Employment Equity Act, ticks all the right boxes and it enjoys international recognition as being among the best in the world.

“The trouble seems to lie with the low levels of compliance and absolutely nothing to do with its construct and design.

“Whilst the general tendency is to blame the employers for non-compliance, I strongly believe that there are instances where workers, unwittingly add to this problem through complacency,” the Minister said.

She called on the workers to be vigilant by ensuring that they truly scrutinize the equity plans and reports before being submitted to the department.

“Workers must become the extra eyes and ears of our inspectorate and the Commission, and report things that appear to be violations.

“Workers need to understand the implications of not making time and effort, to ensure that nothing about them, without them, is allowed to go unchecked. – SAnews.gov.za